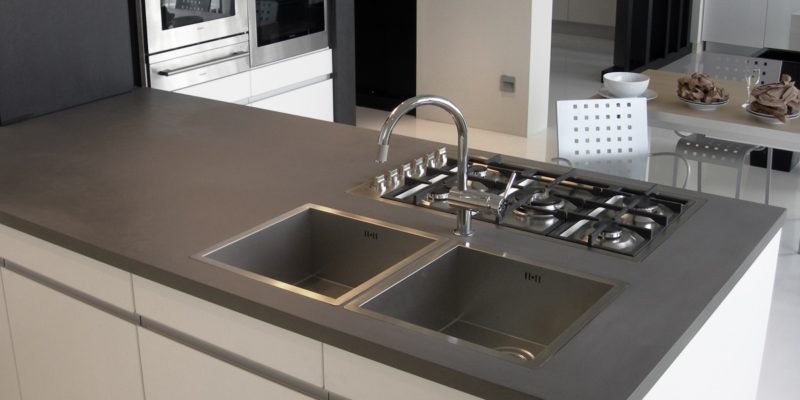 New stones – our selection of worktop materials has grown!

The beginning of the year once again brought with it an expansion in the selection of worktop materials, and so we are pleased to present to you the stones being added to our product selection!

Colonial Ivory, which is a granite that is mined in India. With a slightly jagged pattern that is unique to the granite, while at the same time containing dark and light lines. Ideally suited for worktops in the kitchen and bathroom, as well as fireplace decoration and windowsills.

Dietfurt Grey limestone originates from the mountains of Bavaria, from the same region in Germany where another popular limestone, Jura Grey, is mined. In comparison with Jura Grey, Dietfurt Grey is not quite as beige, but rather a more uniform grey, with a slightly bluish tinge.

There are several news about quartz, with a total of 33 new artificial stones!

Natural patterns have served as inspiration in the creation of quartz. The use of modern technology ensures that the technical indicators of quartz produced in Europe sometimes even exceeds the durability and reliability of the strongest granites. The result is worktops that are beautiful as well as long-lasting!

Veined Michelangelo is well-suited for use as a bathroom or kitchen worktop. The durability and stain resistance of quartz have been combined with a pattern reminiscent of that found in natural stone – marble.

The surface of Imperial Meringa is spotted, with a pattern slightly reminiscent of limestone. The strength of quartz is complemented by patches of contrasting tones (darker and lighter).

Fossil Nautilus is an artificial stone with a grey background and darker dots, which is somewhat similar to fieldstone. 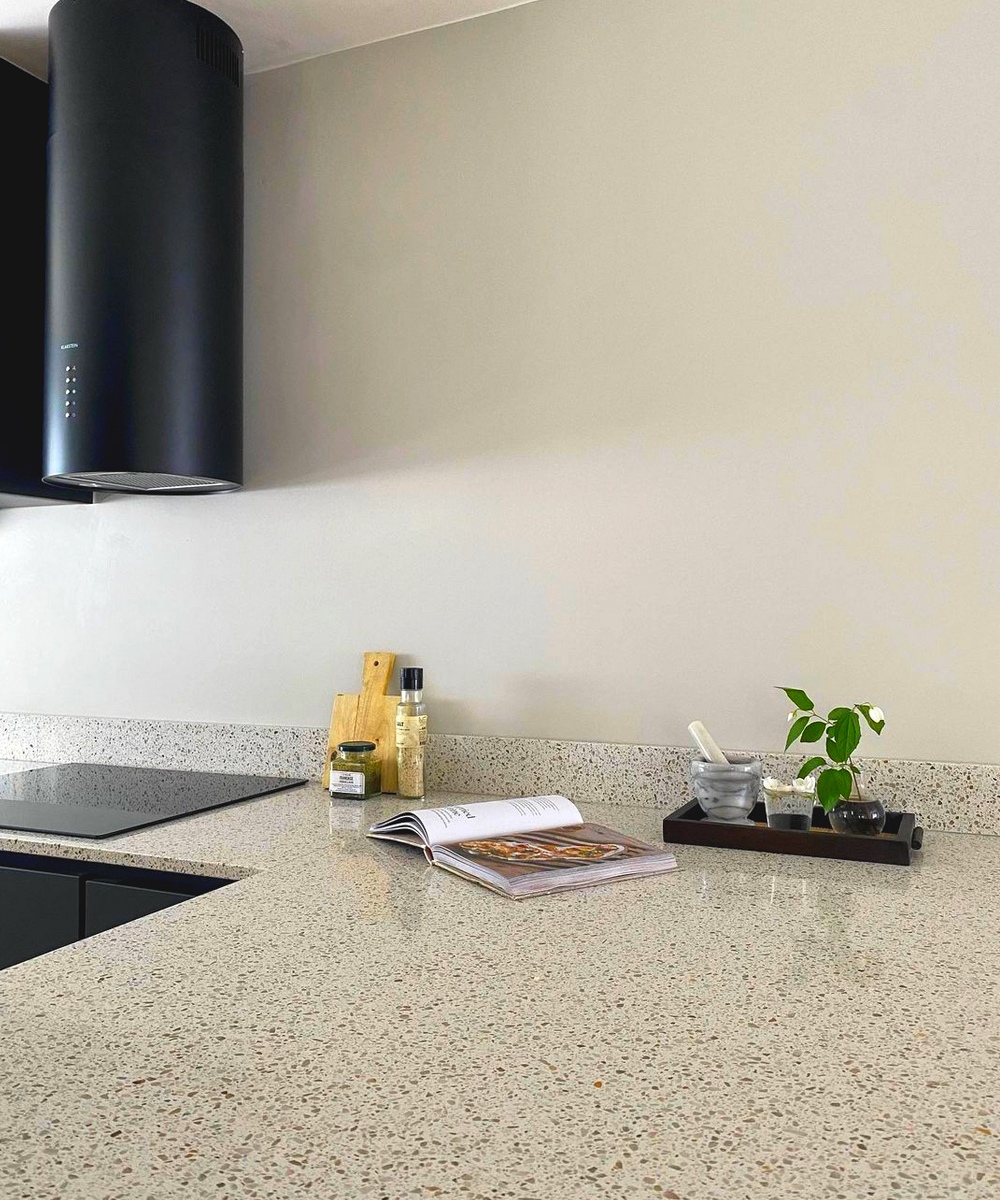 Lavic Navajo is a sandy-beige artificial stone, the creamy background of which is marked by different shapes of grey, yellow-beige and brown patches and fragments.

Planet Mercury is a grey artificial stone with light marble lines. By combining the innovation of production with the appearance of natural stone, a material possessing excellent technical properties is produced!

Planet Neptune is quartz with a delicate grey marble pattern, meeting modern artificial stone making technology. The result is a modern worktop material, which is resistant to stains.

Planet Pluto is quartz in which modern technology and a delicate grey pattern are joined together. The material, which is reminiscent of black marble (Nero Marquina), is both beautiful and practical.

Planet Venus is quartz, the pearly white and marble background of which is complemented by delicate grey lines – veins. In comparison with Neptune, the other representative of the Planet series, the pattern is more dispersed and barely noticeable.

Planet Mars is a dark grey, brownish-black artificial stone, which was modelled based on dark marble. However, all of the beauty of natural marble (such as Grigio Carnico or Nero Marquina) has not been fully copied, with the pattern being more delicate and not excessively dominant.

Planet Jupiter’s lighter wandering marble pattern on a dark background shows no signs of compromise. The quartz resembles black marble, but is highly resistant to staining, which makes it suitable for use as a worktop in both the kitchen and the laundry room.

Planet Saturn is also a bold step into the future, with a design reflecting the longing for distant planets. The natural stone-like appearance is complemented by modern technology, thanks to which quartz worktops are becoming increasingly popular.

Absolute White is a light quartz with a fine-grained pattern, the clean colour and beauty of which are not overly dominant. Suitable for those who values cleanliness and freshness, with its modest design leaving one with relative carte blanche when it comes to combining appliances and furniture.

Absolute Deep Black is a deep black colour quartz, the use of which adds timeless solidity, while at the same time being unpretentious and suitable with everything (especially modern stainless steel appliances).

Add Top Crystal has a light beige-white surface, and its uniform colour is complemented by the lustrous shine of crystalline quartz fragments. Quartz is interesting from every angle because of the way it reflects light, and adorns both the kitchen and the bathroom.

Veined Africa is quartz with a black coloured background, in which the practicality of artificial stone and an exterior reminiscent of natural stone come together.

Veined Baroque is a dark grey quartz, the natural looking stone patterns of which are complemented by the excellent technical characteristics of artificial stone. True harmony between beauty and innovation!

Veined Bernini quartz is slightly reminiscent of marble, although, unlike real marble, the permeability of the quartz worktop is nearly zero. The low-porosity, factory-obtained smooth surface is very simple to maintain and is easy to keep clean.

Veined Canova is also a man-made material, quartz with a pattern mimicking that of natural stone.

Extreme Iceberg White is quartz in which the crispness and clean beauty of winter manifests itself in a uniform light colour as well as a finely textured pattern, which is only noticeable when being examined closely.

Extreme Night Black is a black quartz with a very fine-grained pattern. This allows the dark colour to dominate and the nature of the stone, which is part of the Extreme-Collection, is only revealed upon closer inspection.

Fossil Seashell is also a dark grey quartz, found in the same collection as Nautilus, but lighter and with a barely perceptible pattern, which makes it look like a concrete surface. 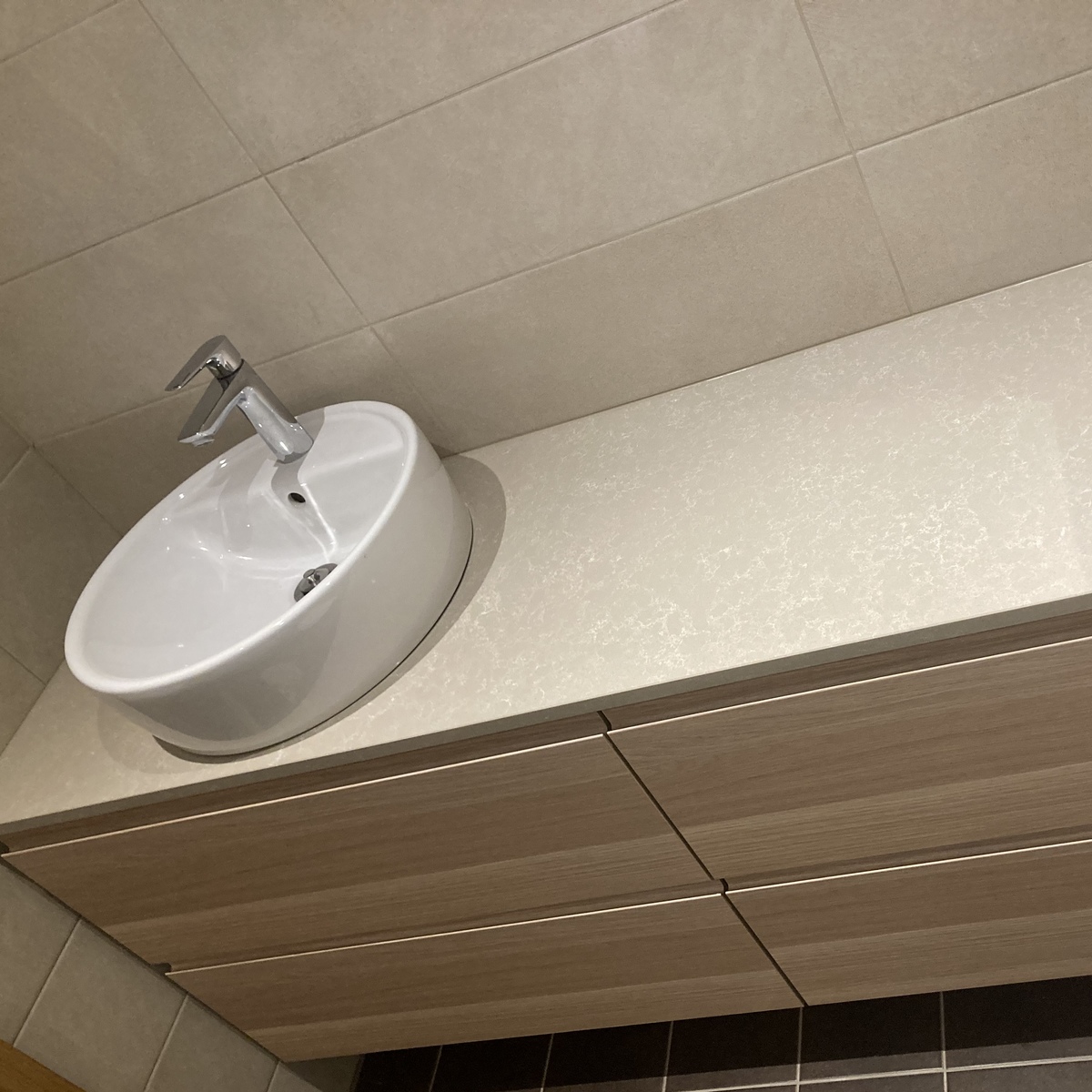 Breeze Hull is a dark grey quartz, the surface of which is characterised by an attractive marble-like free vein pattern.

Cloudy Black is an artificial black stone, suitable for modern as well as classical interiors. In comparison with other black coloured quartz, the colour tone of Cloudy Black is a slightly duller, cloudier-grey colour.

The surface of Cloudy Portland Grey is interchangeable with concrete, although the quartz may, depending on the source of lighting, shine in all shades, from bluish-grey to beige-pink.

Compared to other white quartz, Cloudy White has slightly more intense grains, which means it is not quite snow white when viewed from a distance, instead having a slightly more sandy appearance.

Qf Dark Grey is a standard stone produced by Quartzforms, with a simple and even grain pattern on a dark grey background, it is both stylish and practical.

Qf Light Grey is a standard stone produced by Quartzforms, with a simple and even grain pattern on a dark grey background, it is both stylish and practical.

Ma Beige is a beige-white artificial stone, the uniform light background of which is decorated with uniquely shaped grey and brown patches and dots.

Ma Grey is a light grey artificial stone, the uniform background of which is decorated with uniquely shaped bluish-grey, white and brown patches and dots.

Ma White is a light beige artificial stone, the uniform creamy white background of which is decorated with grey and brown patches and dots of various sizes.

Lavic Black is quartz with a black background and blackish-grey patches, which is uniformly dark at a distance, but with a pattern that is interesting when viewed close-up and which conceals dried water splashes perfectly.

Check out the other materials and find a worktop for your kitchen or bathroom that is both beautiful and durable! Enter the desired dimensions for the stone slab into the price calculator and you will receive an approximate quote within minutes!

What colour worktop should you choose?